This evening I lead my first Lordshill training session as solo Run Leader. It was a little worrying to take full responsibility for the group especially as I didn’t know everyone. However, there were enough friendly faces to reduce the fear. A little. It’s a little daunting leading a session when at least half the runners in the group are far better runners than me. Oh well. There was no turning back now.

Fortunately, I was asked by Dave what sessions I’d be happy to lead when we discussed the session plan for April and May. There were a few sessions we had done before that I was happy to plagiarise. One of these was a fartlek session that Stuart has led in early February.

As with all sessions, we start with an introduction, check for any injuries, warm-up, have the main session and then cool down and stretch. I spent some time giving some thought to what dynamic stretches I could include in the session as this is one aspect that Dave tends not to do at every session. Having googled some ideas, discussed some suggestions with Club Coach Ben, checked out my books on dynamic stretching and Plyometrics, I had some ideas of what to include. However, my intent was to be creative with what we did once we got to that bit of the session.

I had planned to use the Flats on the Common but the fair is due to start on Thursday and lots of the rides have already started arriving. Ben had kindly posted some pictures on the Run Leader Facebook group and several of us had chipped in with suggestions. Again, I had given some thought to a few alternative paths we could use in the event that the Flats wasn’t usable. 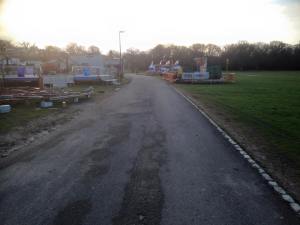 I typed up a cribsheet and laminated it just as a back up which summarised the session just in case stage-fright kicked in and I was left dazed and confused.

I felt prepared. However, that didn’t stop the worry that something might go wrong… Not enough to give sleepless nights though.

I was as prepared as I could be and headed off to the Common with a quick detour via Lynda’s to collect the club gazebo.

When I got to Tauntons, it was clear that numbers were down. There must have been about 60% of the usual turnout. It’s not clear why that was but I suspected the strong wind and drizzly rain played a big part.

After registration was complete, Ben did his speeches and it was time for me to step up. Gulp!

I started off by welcoming everyone and asking if anyone had any injuries. I then explained the composition of the session. Everyone appeared to understand it. So far, so good.

We then headed onto the Common where I led the group for the warm-up. It’s always a little difficult getting the pacing right and I was hoping for slightly quicker than 6 mins per km. My Garmin was giving all sorts of pace values so I tried to keep things steady. While I could hear chatting, things can’t have been too fast.

Once we got to Cemetery Road, I started with the dynamic stretches. Some high knees, heel flicks and arm circles. By this point, I’d not lost anyone. As we left the car park area on the road, there was a good spot to do some leg swings so that’s what we did. 12 on each leg and then some lateral leg swings.

At this point I was tempted to add some walking lunges but chose not to. It was good to have an arsenal of possibly things to do and then pick and choose on the night.

Having run past the Hawthorns Centre towards the Flats, it was clear that the location wasn’t going to work for the session so I decided to relocate to my plan B and use Coronation Avenue South which runs north from the Cowherds Pub.

Once we got there, I explained the structure of the main session – the Fartleks – and set the group off.

The path has an incline in one direction which made it tougher than the Flats. Also, there aren’t regularly spaced lamp posts to use so I decided that trees could be used instead. In hindsight, I should have chosen a longer gap for the efforts and instead introduced this half way through the session to mix things up.

The path section we used was about 500m long compared to about 750m from the Bellemoor Triangle to the Hawthorns. Given the session we were doing, this wasn’t a problem and meant I could position myself halfway along the path and see everyone taking part.

I’d decided not to run the main Fartlek bit so that I could oversee the group, provide some encouragement, provide instructions as necessary and rest from my 9 mile run the day before.

After about 20-25 minutes, I gave the participants notice of how much longer they had. As there were 2 whippets in the group who were half a lap ahead, I decided to cut the loop in half to bring the runners closer together so that there wasn’t so much waiting around one we finished the main session. This appeared to work well although I think I could have been a bit career with explaining this at the time.

Once we regrouped, I handed out some jelly babies before we headed off for our cool down. My brain was a little frazzled by this point and I was getting’cool and warm muddled up. I decided to let Jonathan and Teri lead the cool down so I could act as tail runner as we headed down to the Bellemoor Triangle.

Once we got there, there was time for a few more jelly babies, a few stretches and a couple of announcements before we completed the session.

Overall, I was happy with how things had gone. As suggestions to myself for improvements, I think I should:

All  feedback from  those that took part grateful received.