I’m not sure what my blog readers have done to deserve a mid-week update but you’ll know for the next time.

On Monday, I decided that my achy foot needed a rest and that running would have to be put on hold for a few days. With that in mind, I made the decision to not run in next Sunday’s Stubbington 10K and transfer the place to someone who’d not been able to get in prior to entry closing. Having found a suitable replacement and asked that rather than pay me for the place that they make a donation to charity, I decided that I’d focus on the pool and bike for the week until parkrunday.

This did mean that I would miss Lordshill training which was disappointing. However, it gave me an excellent opportunity to get back to the Monday evening STC swim session. I decided that I’d attend the 8pm session as it’s normally quieter. I wasn’t disappointed.

There were only 3-of us in the lane; Donna, Liz and myself.

At some point, we had to do 100m kick – one of my worst nightmare in the pool and some drills that involved no arms. At that point I was beginning to regret my decision to attend.
We then had to do another 5 x 50m at race pace before cooling down. In total we swam less than 1.8km and it had felt tough. Having said that, it’s should have done after not having swum for a fee months.

Just got a moment to explain the blog post title… it could have been ‘It does what it says on the tin’. I’ve recently changed anti-perspirant/deodorant. For quite a while I’ve had times where I’ve honked like a donkey and that’s been after regular showering and the use of Lynx. I’d hoped to smell delightful after such a regime but must have been very unpleasant to be close to. There are plenty of reasons to avoid me, but I didn’t want body odour to be the main one. The Lynx Effect hasn’t been as the TV adverts had portrayed at all. Instead, it would appear that the roll-on I’d been using had become ineffective. I decided that I could no longer suffer my own stinkiness so choose a different under-arm wiff-neutraliser. The difference has been amazing. I still smell gorgeous (some creative licence there I think we’ll both agree. If only I could buy a spray that could make me look half decent let alone gorgeous) after 24 hours and feel that I can spent time in the company of others without them wondering whether I’ve been living in a shop doorway. As out turns out, I checked out The Lynx roll on bottle to find that it was only an anti-perspirant. D’oh. Please note that I’d prefer that you didn’t all tell me know how smelly I was. Let’s just consider it as an understanding between us.

A friend recently told me to stop putting myself down. In complete honestly, I do it for ‘entertainment’ (using the term very lightly) and don’t have a low opinion of myself. Don’t get me wrong, I’m far, far, far from perfect and have lots of faults. You know what they are. Moving on… 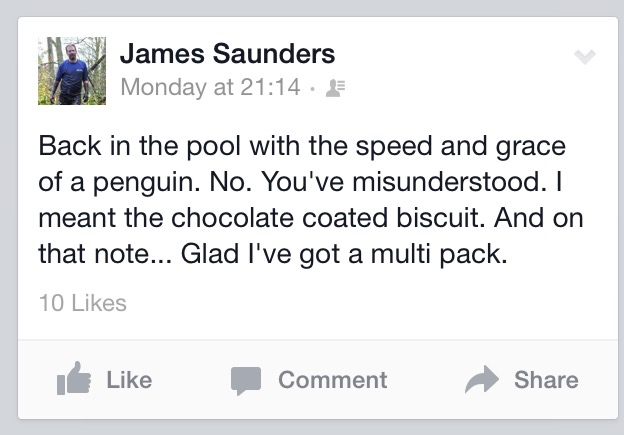 Back to my week… Tuesday was a ‘rest day’ which meant I could be lazy. Rest days are bad. They mean I have to watch what I eat and can often result in eating several hundred calories more than I should. As one of my goals, I’ve started recording what I’ve been eating using myfitnesspal. This app is amazing and without it, I have no self-control over what I eat.

I’ve also started using an app called ‘Way of Life’ in which you define a series of daily goals. I’ve chosen several including:

Each goal can be categorised as good or bad. At the end of each day, you go through each goal and indicate whether you achieved it. It’s given me some focus and appears to be working.

One of my daily goals listed above is ‘Do 3 hamstring stretches a day’. I can’t touch my toes (well, I can but you know what I mean) and haven’t been able to for as many years as I care to remember. I’ve been told that being flexible and being able to touch my toes is a good thing (unless ‘soap on a rope’ is also part of the equation). So, I’m trying to get to the point where I can reach this goal. Once I can do it, expect me to be showing my new skill off at every opportunity. Apologies in advance.

Back on track. My enforced, self-inflicted running ban meant that on Wednesday I decided that I’d go out on the bike. Having swum on Monday meant I’d also decided to not get out of bed at an unacceptable hour for the STC Swim session.

There was every likelihood that I’d bail due to poor weather conditions which included high winds and wintry showers. (Un)fortunately, the weather gods decided to reward me with a 45 minute respite from the wind and rain so that I could enjoy a 40 minute cycle ride in the sunshine. I took the opportunity to try out my Garmin Virb Ellie action camera which had been reduced it price to such a degree that Amazon were practically giving out away. Why did I want to record my journey on an action camera? Well, because I can. It’s sad to admit that I’ve really enjoyed playing back the footage especially when stats from the Virb’s GPS are included (it’s also possible to pair ANT+ sensors such as cadence and heart rate although I’d forgotten to do that) and overlay those over the video footage.

I really enjoyed the ride (and reliving it numerous times) and am looking forward to a break in the forecast wintry weather in the next week to be able to get out again.