In Saturday, I thought I’d finished my training for the week but I managed to get out for a ride on Sunday too.

In the morning, Daniel and I headed to Riverside Park for the 30th Southampton junior parkrun. The weather was pretty good and we arrived at about 8:20am and were soon joined by Donna who was Run Director for the morning.

Daniel and I went off to set up the course as juniors, parents and volunteers started to arrive. One of the unseen jobs was to try and put several dog pooh bags in a pooh bin which was already overflowing. Riverside Park is lovely BUT the fields are full of dog pooh which dog owners don’t pick up (it seems particularly bad where we have the junior parkrun start and finish as it’s near to one of the main entrances to the park). The core team always fill several bags just clearing the area around the finish funnel. Quite frankly, it’s disgusting and the owners should be more observant and the Council should put up more ‘clear up your dog pooh ‘ signs. They should also empty the bins regularly over weekends with good weather. Seeing overflowing bins really doesn’t give a great impression. Anyway, rant over.

After Donna completed the warmup, I took my position as one of the two stopwatch operators and the run started.

I walked down and took a few photos of the juniors before having to jog back to the finish to start capturing finish times.

Jeremy (the other volunteer in timing duties) were spot on with our finish times and they tallied up with the number of finish tokens handed out. This makes the results processing a breeze.

Once the 89 juniors had completed the 2km course, it was time to pack up. Donna was heading off to Bournemouth for a 12 mile run so I offered to process the results. Had I one so if there’d been a mismatch with the results is your guess! Only joking, I was more than happy to help!! Honestly!!

I was expecting Daniel to want to go home but he was pretty keen to go to Sprinkles for an ice cream. Who was I to say no? Especially as I was fairly sure he’d got a PB.

Once we had ordered and processed the results (and Daniel had demolished his vanilla ice cream), it was time to head home. Daniel had PB’d by almost 30 seconds. Well done Daniel! 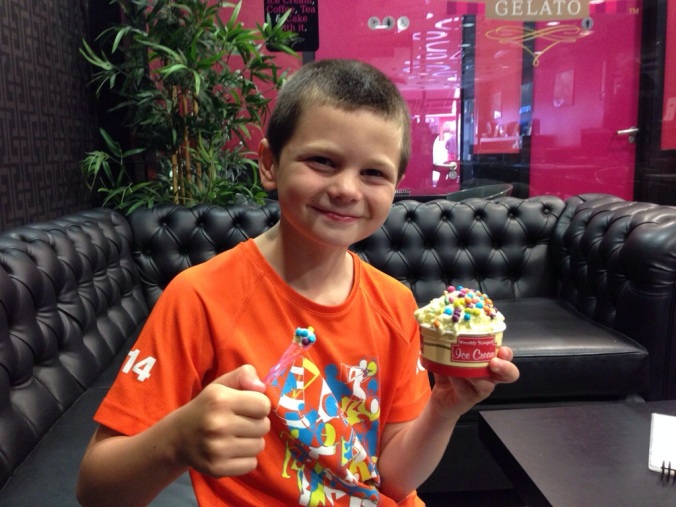 Denise and the boys had plans with friends for the afternoon so I did some chores. I had been hoping to be able to have a quick cycle ride so got the chores done as quick as I could.

The weather was still good, although windy, as I headed out on my road bike. I didn’t really had a route in mind but wanted to be out for an hour or so. I decided to head towards Chandlers Ford via Eastleigh and was surprised to see my average speed was around 26kmph.

Once I got to Chandlers Ford, I then headed towards Romsey. At the time, I was considering cycling all the way there but was a little wary of the time so at North Baddesley turned left towards Rownhams instead.

I was still hitting a reasonable average speed. One of the services I use is Strava. My Garmin stats are streamed into several such services including Runkeeper, Strava and Training Peaks. The latter is what I use to set out my training plan. My main use of Strava other than the fact it’s used my many running and triathlon friends is segments. These are sections of a route that are commonly run or cycled by the Strava community and for which the speed, time, power etc are maintained per segment. There are leaderboards and you can attain PRs (Personal Records) which is good for motivation.

Anyway, back to my ride…

I was soon at Lordshill and having to work hard up a hill or two!

I chose to cycle north up the Avenue. Always quite busy, the main issue isn’t the traffic. It’s the potholes on the northbound carriageway. The section I cycled is pretty bad and I end up cursing the road every time I ride it.

When cycling tht stretch, I normally turn right at the large roundabout and head down Bassett Green Road but decided to take a longer route so continued north back towards Chandlers Ford. A nice downhill stretch past Asda to enjoy.

As it was about 40-45 minutes into my ride, I chose to head home past Southampton Airport, the Ford factory and then via Mansbridge Road up the short, sharp hill at Hobby Craft and then home.

I’d been out for just over 70 minutes, had cycled a little over 30km and was home.

Once my data had synced, I checked out my Strava segments and was pleased to see another small haul of PRs. Woo hoo!

I also checked out how Chris, Ben, Chris and Ian had got on at the Cotswold Half distance triathlon. They’d got on really well!! Ian had done incredibly well with a very strong swim, cycle and run to finish in 5 hours. An awesome performance. In fact, he’d finished ahead of all of the others which is testimony to just how dominant he is in the bike but also how hard he’s been training. The lake swim in a wetsuit had clearly suited him as he’d swam really well.

With my good cycle ride and the great performances from my tri-friends (well done also to Neil C, Carl on their tri-performances and to Neil G on his mammoth ride), I’m feeling more confident about the half distance triathlon on September. Although triathlon is a multi-sport event, the main focus is the cycle (as it’s the section where you’re out for the longest of the 3 disciplines) and it’s the cycling that I’m making sure I don’t skimp on over the next 12 weeks.

The cycle ride rounded off a great week of training with 142km covered over almost 10 hours of training. Go me!!