Having got home from my visit to Queen Elizabeth, I decided to go out for a run. The weather didn’t look too favourable but I wanted to relax and a run seemed a good solution. However, as my Garmin didn’t want to sync with any satellites, I was a little annoyed as I started my run. Before long, and with the footpod providing a ‘good enough’ measure of distance, I just ran. It rained but I didn’t really care. It was nice to get out and run. Run, ran, run, ran! Sorry!

After the run, the Garmin refused to sync with my PC no matter what I tried. I grabbed the main stats from the activity history and wrote them down just in case and decided to wait til the evening to try and find a solution; ideally one that would result in the loss of any data. (I lost the data as I had to do a reset of the watch. Oh well!)

At about 3:15pm, I headed out to the 2nd part of my Baton Bearing duties. A reception at the Guildhall with the opportunity to watch the (crazy) cliff diving team dive from a platform about the size of a CD-case (showing my age there!) 25m high into a pool that was 3m deep. Nutters!

Having arrived at Grosvenor Square to park, lost a battle with the meter, called SCC Parking Services to explain what I’d done, poured more £££s into the meter and written a note to the parking warden explaining what a chump I’d been whilst fully expecting to get a penalty notice for being a chump and then having to send proof of who I was, what I’d been doing and how I’d represented the city (perhaps exaggerating and saying I’d been one of the cliff divers), I walked to the Guildhall Square where they were setting up for the early evening’s events.

On arrival, I wandered around and spotted the Marafun stall. It was unmanned and I spotted MD Chris helping to put up ‘We are England’ banners in front of the stage. We chatted for a while about this and that (not the words themselves you understand!) before I saw Craig Lintott who I introduced in my last post. This was Craig’s show and he was busy organising everyone and trying to talk to people whilst listening to others in his earpiece.

After helping with a few barriers and banners, a couple of the other Baton Bearers arrived and we were escorted to the ‘Green Room’. We were the VIPs for the day along with the Baton. OK, the Baton was the VIP. Let’s call it the VIB (Very Important Baton) shall we? We were just its carriers or Bearers to give us our official title.

The Green Room was in the basement of the Guildhall and was a step down from the luxury of the Queen Elizabeth. In fact, it was much more than a step down. Much much more! I sat with Annie Clewlow, the programme manager for the diving at the Quays. I’ve emailed Annie several times as Daniel has diving lessons there so it was great to out a face to the name. Annie was there with her mum and it was clear that mum was very proud. And so she should be, Annie does a great job!

We spoke about lots of things including whether Tom Daley had influenced an increase in participation in diving (the answer was no) and how the 2012 Olympics most definitely had. We also spoke about Tom’s synchro partner Peter Waterfield… who had had an influence on diving participation particularly in the local area.

I unashamedly asked for a photo with Peter who insisted on getting his medals out to let me hold (fnar fnar!)

We stayed in the Green Room (even if I continue to call it that, it won’t get any better looking so I shall start to refer to it by its proper title, the rather scruffy basement) for quite some time and weren’t really sure what we were supposed to be doing. There were refreshments on hand through (an urn, some tea bags and dried up sandwiches which could have been there from the last time to basement was painted) so we did out best to avoid those!

After a while, Craig returned to tell us that the QBR team were late, most likely stuck in traffic, and we had to wait a little longer. The rest of the Baton Bearers had arrived so it was good to swap stories of our experiences with the Baton, the funny stories we had involving the Baton (not so funny to the QBR team!) and briefed Annie on all the dos and don’ts of being a Baton Bearer.

The Baton arrived (or maybe it was the stand-in. You know, the one that definitely doesn’t exist!) and there were various photos taken of it with the Bearers and their assorted family members.

One noticeable thing was that the QBR team were much more relaxed about how the Baton was held and handled etc and there wasn’t always someone watching its every move – it must have been the stand-in mustn’t it?! I asked one of the members of the QBR team who explained that we were in a ‘safe area’ without any media. It seemed the media were the ones that could lead to things going awry.

Annie was then briefed on what she’d be doing with the Baton. It then sunk in that we’d end up on the stage. In fact, we’d all be introduced and walk individually onto the stage to lots of applause, cheers and hopefully no rotten tomatoes. Gulp! Just to add to the pressure, as I had been the first Baton Bearer of the day (aside from Iwan who had other plans for the evening), I’d be the first on the stage. GULP!

We lined up in order and I realised that the compere was talking about me and was told to start my walk to the stage. It was only about 100m but it seemed to be taking far too long to get there and I wasn’t sure the crowd could keep up their clapping and cheering before losing interest in some middle-aged bloke they didn’t know from Adam as he ambled to the stage. To give them a little excitement, some flame effects went off as I passed them. They didn’t startle me but I made out they did for comic effect. No, honestly that’s what happened. Given that my Baton Bearer T-shirt was quite thin and I’d forgotten to put a vest on (something I’ve thankfully forgotten to do for the best part of 38 years!), the naked flame provided a little warmth. To ease the wait for the onlookers I decided a jog up the ramp was appropriate. Fortunately, I didn’t trip (once in a day is enough!)

I got to the stage, smiled and listened to the applause… Maybe the cliff divers had started their display simultaneously to my arrival next to the compere… 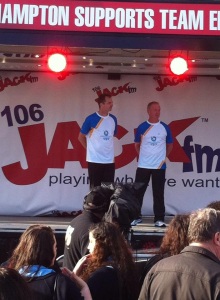 On stage with Nick Chmarny – really nice bloke. A laugh a minute (or more frequently!)

I looked into the crowds and spotted Teri, Tim, Emilia and William who had a prime position. I also saw Aaron and Callum and Dave Clothier.

The view from the stage

There were other friends there too (Liz and Asa) but unfortunately I didn’t spot them. Sorry! 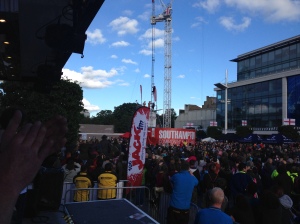 Looking from the stage to the diving tower and pool

Before long, each of the other Baton Bearers joined me and we were all given a penultimate round of applause. 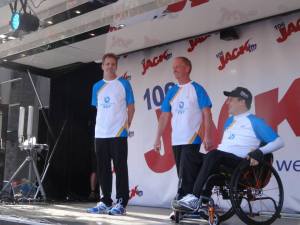 On stage with Nick and Richard Cartright. Many thanks to Teri Pragnell for the photo

Fortunately, the cliff divers were ready to start their set so we could rest our facial muscles and enjoy seeing them taking centre-stage while we clapped and gasped at their, um, bravado. They were crazy to do what they were doing but put on a great show and it was a fitting end to the early evening’s celebrations.

Annie Clewlow, Richard, Chris Grainger and Nick… and thousands of appreciative fans… of the divers.

The Baton Bearers were then given a final round of applause and we were escorted off the stage to continue to mingle with some dignitaries (also known as the group of people propping up the bar!) and the new Mayor who was doing a grand job of demolishing the trifles.

Overall, the day was amazing (apart from the Garmin issues). The events were really well organised by Craig and his team. We were made to feel special and the crowds at the Guildhall seemed to be appreciative of our being there and maybe the contributions we’d all made to the local communities in terms of delivering some great sporting opportunities within Southampton.

It’s a day I’ll not have the chance to better in terms of recognition of volunteering and one that I’ll look back at fondly particularly as I tell my grandchildren about the day I was Captain of an Ocean Liner, Queen Elizabeth, in the morning and then in the afternoon how I dived, whilst on fire, off a platform the size of a postage stamp (I’ll clearly have to explain what a postage stamp is and why we used to write on paper, please in more folded paper, affix said stamp and then have to walk to a box to ‘post’ it to possibly arrive, or most likely not,several days later) 50m high into a pool of water no deeper than a puddle to the cheers of thousands of onlookers. I probably won’t mention the Green Room…

I’ve uploaded many of the photos taken on my phone.