I was umming and ahhing about what to do on Saturday. With the pools closed on Monday due to the Bank Holiday,

I wanted to squeeze a swim in but also wanted to get a run closer to my 100th parkrun. As the STC session at the Quays and parkrun both start at 9am, that wasn’t an option. Then I was reminded about the lake being open at Lakeside so decided that I’d do my first lake swim of the year and then go to Fleming Park for my 79th parkrun. Sorted.

Later in the week, Denise asked what my plans were and I was then asked why I was planning to do both swimming and running to which I reminded her I was a triathlete and I’d be doing far more than a 1km swim and a 5km run in one day when I do the Challenge Weymouth Half Triathlon. I’m not sure that fact made any difference as I was told I was ‘becoming obsessed’.

The thought that my cycling had been neglected was playing on my mind so I decided to address that too by cycling to and between the activities. I set to work on calculating distances. Rather than choose the easy 5km from home to Lakeside, I decided to go ‘the long way’ by heading down Allington Lane through Fair Oak and Bishopstoke. That would be a 12km route instead and I decided to cycle back that way too.

With several triathlons this year, I had decided that last year’s approach of using a large see-through box and rucksack wasn’t the best way to transport my sizeable stash of triathlon equipment and certainly wasn’t a viable option for my plans on Saturday when I’d need swim, run and cycling equipment. I decided that a transition bag was the answer and that as I’d be cycling to Lakeside and then Fleming Park and finally home that the transition bag would have to be carryable on the bike. A little coincidence was that I’d seen a Blueseventy T1 Triathlon bag (Backpack) on a Facebook page so I did some checking around. For some reason Wiggle had the item discontinued but there were several other ecommerce sites selling it so I placed an order.

As the lake was likely to be 12-14 degrees C and the air temperature was forecast to be about 3 degrees C on Saturday, I decided to purchase a thermal cap, gloves and booties. Although I’d probably not need all of these at any one session, having them in my equipment stash would be useful if the open water temperature dropped. Wiggle were in stock with blueseventy products to meet my needs so another order was placed. Ker…ching!

Fast forward a couple of days and Saturday morning had arrived.

My alarm was set for 6am and I’d worked out my plan for the day which was:

All do-able and no need to rush too much.

My transition bag was packed. It’s amazing how much gear is needed and it felt like I’d packed for a weekend rather than a morning. The transition bag has a 32l capacity and I’d filled it all with wetsuit, etc.

I’d decided to wear my tri-suit with track suit trousers and a cycling jacket and keep the tri-suit on for each of the activities.

At 6:30am I was on my bike and heading off for Lakeside. My original route was to get to Eastleigh and then follow Southampton Road directly to Lakeside but as I got to Eastleigh a Station I decided that to save time later, I’d add a little extra to my first ride and take a shorter route home. The plan was to still cover 24km in total.

The ride to Lakeside was uneventful and I got there later than I’d planned due to the change of route to Lakeside.

The car park was pretty busy and I spotted Ian Boshier’s van as I cycled through.

Having locked my bike up outside the changing rooms, I signed in, collected my Try Tri lake swim pass and went to get changed.

Having seen what everyone was wearing, I decided against the gloves and booties but decided to wear the thermal cap.

There were several people there I knew as well as Ian including Ian Fearon, George Sellors and Sonia Rushby.

Once I’d reached the edge of the lake, I was able to zip the back of my wetsuit up myself. That was the first time… ever that I’d not needed help. This was great news as it meant my weight loss meant the suit fitted me better!! Result.

Having donned my thermal cap, it was time to enter the lake.

This is always reminiscent of a zombie shuffle and was no easier than ever before due to the slippery surface underfoot.

The water was cold but not too cold. My feet felt like blocks of ice from the chill of the ride and the fact I’d not worn socks though.

The lake temperature was certainly not as cold as I’d expected and felt much warmer than the air temperature. I spoke to Ian B who’d done one lap already and then had a conversation about goggles with a couple of other swimmers (who else?) before starting my swim.

As my face touched the water, the coldness took my breath away and I struggled with my breathing for the first 50m but knew this was a normal reaction. I’d forgotten to submerge to acclimatise. As I warmed up, I got into a normal breathing pattern (although not bilaterally breathing) and tried for an efficient stroke.

On the 3rd straight of the lap, at the far end of the lake, the distance between buoys is its shortest but it always seems to take a long time to swim between them. I often wonder whether there’s an undercurrent!!

I must say that the new yellow buoys are so much more visible than the purple gym/swiss balls from 2013! This makes sighting far easier and I felt than my path between the buoys was much straighter than previous swims.

Having completed one lap (approx 350m), it was time for a rest and a chat with Ian, Sonia and Julian (who didn’t recognise me at first). While we chatted, Donna arrived at the side of the lake so I waited until she got in and had a chat with her too.

As a quick aside, I have to say that the thermal swim cap was amazing. Although my face had got cold, my head wasn’t. In fact, I felt very comfortable and not even wet!

Donna and I headed off for another lap (my 2nd) with Donna on my toes (I think!) On the straight back to the start, another STC member and I kept swimming across each other. All good practice for an event.

Once we reached the start area, I checked the time and was a little undecided as to whether do another lap or get out.

I decided to do another lap and that was uneventful other than forgetting to put my goggles on.

Being back in the lake felt great. It’s not the cleanest or biggest open water swim venue but its location is so convenient. STC coach Steve likened it to a muddy duck pond and he’s not far wrong!!

Having changed back into cycling kit and spoken with a couple of other triathletes about events, it was time to cycle to Fleming Park. I took the shortest route so I got there just after 8:30am.

I caught up with Chris and spoke to several others. Sonia and Donna arrived just before 9am from their lake swim and Donna and I decided to have a leisurely run together. It was really nice to have someone to chat with without the pressure of trying for a PB. 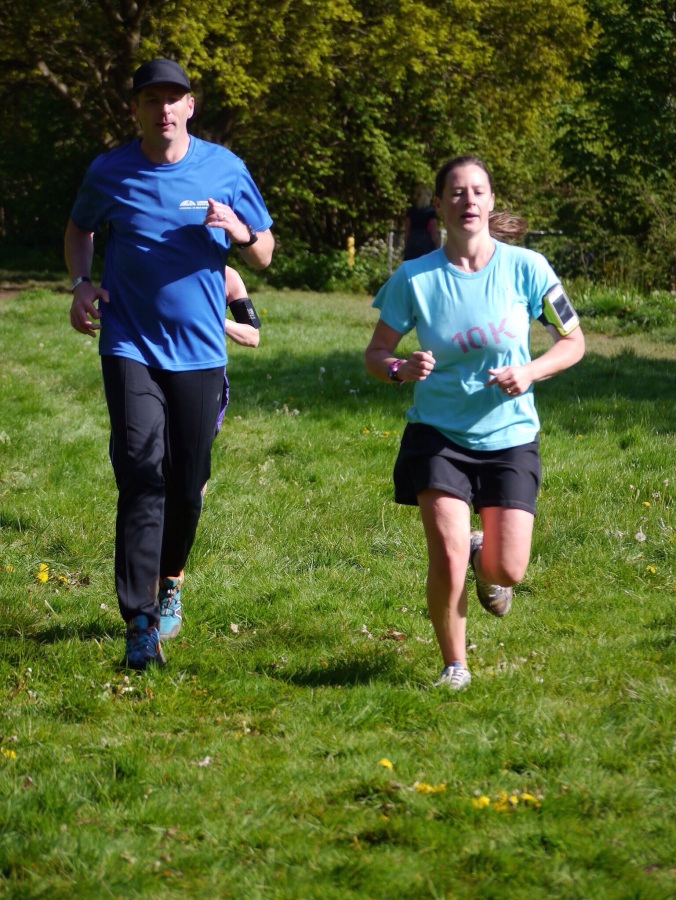 Thanks to Susan Bryan for the photo

We crossed the line in just over 29 minutes and I spoke with a few more friends before changing into my cycling shoes and headed home.

Overall, I covered 24.5km on the bike, 3 laps of the lake (approximately 1km) and a 5km run broken down as follows:

Not bad for a morning’s work especially as I’d also burned about 1600 calories which meant I could enjoy a guilt-free trip to Pizza Hut later in the day!!