Well, this week I have a week’s holiday and that means lots of time with the family and a little less training.

On Monday, we lazed around for the day until the late afternoon when we took the boys down to Riverside Park on their bikes. In the evening, it was the STC swim I posted about earlier in the week.

On Tuesday, we visited Chessington World of Adventures which was great. Lots of walking. Managed to avoid ice creams and various calorie-laden meals.

On Wednesday, we took the boys to airkix in Basingstoke for some indoor sky-diving. It was an amazing experience. We were in a group of 10 and after a video briefing and meeting our instructor, Gary, we put our ‘flying suits’ on and waited to be called through to the airlock.

Denise was 2nd into the ‘tunnel’ and did really well. She was very stable in flight and probably one of the best in the group. Up next was Daniel who entered the tunnel apprehensively – not surprising due to a combination of the noise and wind.

Daniel got into a flight position quickly and the instructor tried to signal that he needed Daniel to straighten his legs. However, I think nerves got the better of Daniel and he put his thumbs down indicating that he wanted to leave the tunnel.

Connor was next and he did really well. As a 5 year old he’s probably one of the youngest to use the tunnel. He tried so hard but ended up trying to swim through the air and then signalled that he wanted out.

Next up was me. I entered the tunnel and fell forward into flight position. I was able to get into position ok but found that I was moving around a lot. The slightest movement was magnified 10-fold. Lowering the hands into your eye-line meant you raised up the tunnel but any movement of a hand or leg led to me careering into one of the walls. After 75 seconds my flight was over. It seemed like much longer.

The other family then all flew before it was Denise’s turn again. Again, she did well although having watched the DVD, she was less stable on her 2nd flight. At the end of her 2nd flight, Gary asked whether she wanted to be spun up to the top of the ‘tower’ which she did. This was an extra £5 but well worth it.

It was then my turn for my 2nd and last flight. I felt more stable that time but certainly wasn’t as stable as Denise. The culmination of my flight was a ‘high-flyer’ where the instructor span with my to the top of the tower. A great experience. 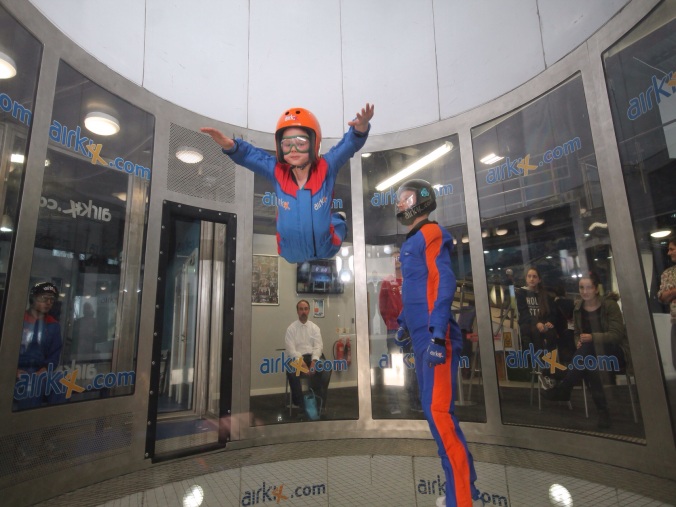 After the other family had had their turns, Daniel had his third flight. Lucky lad!! He did well again and just before he left the tunnel, Gary swung him around and around.

A great experience. Definitely worth £60 in Clubcard Boost vouchers.

While we were out in Basingstoke I received an email from my Mum to say that the Daily Echo had announced the 6 people chosen to carry the baton in the Commonwealth Games Queen’s Baton Relay in Southampton. The city, celebrating 50th year since becoming a city, is one of the few cities outside Scotland to have the baton pass through it.

The 6 chosen Baton Bearers include Iwan Thomas and Annie Clewlow who organises diving at The Quays.

I was nominated and short-listed to be an Olympic Torch holder but unfortunately wasn’t one of the chosen few back in 2012. However, I feel really honoured to have been chosen as a Baton Bearer. Being chosen brings a lump to my throat as I don’t want or expect any reward for what I do with parkrun. I’m involved because I love what I do and it’s a big part of my life and has changed my life considerably in the last 3-4 years.

Although I’ve founded 3 parkruns (Netley Abbey, Southampton and Southampton Juniors) and helped several other events start over the last 3-4 years, their success has been down to the amazing event teams that have worked tirelessly week in, week out to deliver each parkrun so as I hold or carry the Baton, I’ll be holding it in behalf of the Event Directors, Run Directors and core volunteer teams who give up their Saturday (and in some cases, Sunday) mornings to enable many hundreds of runners of all ages and abilities to enjoy a run and all the other amazing community spirit parkrun encompasses.

Will write another post later in the week to cover the rest of the week.

One thought on “What a week… so far”