I really wish I’d started this post earlier in the week before I’d forgotten most of what I’ve done (yes, it must be my age Teri!)

Monday – the usual Monday evening STC swim session. It was a pacing week and we did a lot of 100m sets. I didn’t pace perfectly and was a little fatigued after the Eastleigh 10k but was pleased with my efforts. Some of my SWOLF scores were under 40 (note that the SWOLF is based on Garmin calculation). In recent swims, I’ve ditched the nose clip which I hoped would help with my streaming nose as I was struggling to breath particularly bilaterally. I’d rather feel comfortable while in the pool than be snot free after. Having said that, I’m going to try a different anti-allergy remedy, Pirinase Spray, to see if that helps (thanks for the suggestion Tamsyn).

Tuesday – the last Run Camp session of the 12 week block. It wasn’t a full group as Steve, Max and Andy weren’t there. This left me with Gareth to try and beat in the intervals. Not a friggin’ hope!! Gareth is quick and normally covers about twice the distance I can manage. Katherine was struggling with an injury and wasn’t running her fastest. We were doing 3 minute intervals with 3 minute recoveries. We all ran together and it was clear that Gareth was going to lead us. I was pleased to be 2nd on each of the 4 sets. In fact, there was less than 100m between us on each of the sets as I covered 0.72km (720m on average) and Gareth was completing about 800m. Had Steve been there and Gareth not still suffering from a birthday weekend of excesses, I’m sure the gap would have been much larger!

On the last two intervals Tamsyn lead us out and went at one helluva pace. Had she been able to sustain it, Gareth would have struggled to keep up. Fortunately for Gareth (and myself), Tamsyn began to flag at around 250m so we could creep by.

The pacing of each of my intervals was pretty good. I was able to complete roughly 720m each time which was great.

Wednesday – 2nd STC swim of the week. An early start of 4:40am to get in the pool for 5:30am. I really struggled to get up and, in reality, it was closer to 4:50am before I got out of bed. I did though. Triathlon training is tough. Fitting 6 or 7 sessions in per week is a struggle at times.

There were 4 of us in the lane and I didn’t disgrace myself with my performance. These sessions are 80 minutes and we covered 3.2km again. Good session. More miles in the pool.

Thursday – given that Mother’s Day is massive for online florists, I knew this week was going to be busy. That meant that I had to do a treadmill run. I decided that a 5km pyramid run would be something fun to do so did!!

Not much to say about the session. I did it and felt good.

Friday – workload meant that I couldn’t get on the bike, swim or run so I did some S&C. Chest presses, planks, wall sits, tricep dips, tricep curl, etc.

Saturday – yet more work and no opportunity to parkrun or so the STC swim session. I did, however, get the bike on the rollers between firefighting issues. I managed about 35 minutes over 3 sets. Nothing earth-shattering other than not falling off which I guess is a positive.

In other news, I’ve decided to tackle my 40-inch waistline. Given all the training I do, you’d expect me to look skinny. However, I’m packing a spare tyre that would be more appropriate on a truck. It’s slowing me down and acting like an anchor when I swim. In fact, I’m sure it sometimes skims along the tiles at the bottom of the pool. Anyway, you get the picture, or maybe it’s best that you don’t! Ant Gritton of Run Camp made a suggestion in a recent Facebook post to use MyFitnessPal. I’m fairly sure I’ve tried it briefly in the past but am glad that Ant mentioned it again as it is an incredibly great app! Their website stinks though so avoid that.

Using the app is so easy particularly given its incredible database of foods and the fact it remembers that you eat regularly and what combinations of foods you have together. I really can’t fault the app at all. The only thing I change is the calories burned through exercise where I use my Garmin-calculated calories rather than those suggested by MyFitnessPal.

I really don’t have a clue of the composition of my diet with regards to fat, carbohydrates and protein so it’s really helpful that the provides a pie-chart (seems appropriate!) of these: 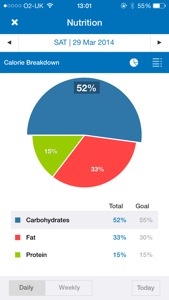 I’ve set myself a weight-loss goal which is reasonable and am tracking everything I eat and so far, it’s going well. 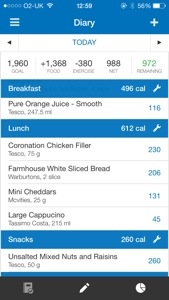