I’m awake at 2am again so have decided to blog about day 2 on the slopes.

Although on day 1 we decided to take the resort bus into Plagne Centre, we decided to shake it up on day 2 and ski there. With the boys! Given that they had been on a chairlift once, this was an ambitious plan as they’d need to go on 2 chair lifts to get to ‘Centre’.

Having consumed another tasty breakfast and donned our skiwear, it was time to head down to the boot room and then down to the bottom of the 4-man chair. Unfortunately, one we got there, Connor decided he had other plans and needed the toilet so we went back up 4 flights of stairs and got him out of his ‘all-in-one’ ski suit.

We got back down to the boot room, picked up boots, skis and poles and then headed down the road to the chairlift where we met our instructor. We didn’t expect to so that was a nice surprise. The mini bus for the children’s ski school was waiting and although we hadn’t planned to, we decided to let the boys take that to their lessons. As Connor has struggled to get down the road in his ski boots, this turned out to be an excellent idea and all 3 boys happily got on the bus and we waves them off having made it clear to 7 year old Daniel that he was to look after his brother and Harrison. I think we were all a little wary of letting them go off by themselves in the bus but it really worked out well as they smiled as they left.

Meanwhile, Denise and I headed up the chairlift to Plagne Centre. Denise’s boots were tight due to wearing thicker ski socks and she was getting cramp in her feet and especially toes.

We got off at the top of the lift and then skied across to another lift which took us to the top of the nursery slope which then lead us down to the ski school meeting point.

Our group had grown from 4 to 7 with the addition of Paul, Jean and Rob and we headed up the mountain to then ski down to Bellecote.

Denise was struggling as the cramp in her feet meant that she couldn’t concentrate so she left the lesson at Bellecote before heading back to watch the boys at Centre.

The weather really want great with fog all over the mountains. Visibility was really poor and that meant that seeing the pistes was, at times, pretty difficult and seeing the terrain and profile of the slopes impossible. That meant that you really had to ‘feel’ the slopes as you skied, keeping weight on your downhill ski and make sure that the weight was forward to avoid lifting the ski tips.

Although we mainly skied blue slopes, we skied down a red slope, Sources, which was a lovely slope particularly given that we couldn’t see how steep it was. Our instructor, Dee-Dee (misspelt) gave us some useful information about the poles on the right hand side of the slopes having orange at the top. That is how you can ensure that you’re not skiing off-piste in poor conditions.

I was very happy with my skiing and was getting a fair amount of positive feedback from the instructor whose tracks I was following well. Given the 9-11 years off the slopes, it was great how quickly is regained my technique and confidence on skis particularly in difficult conditions.

At the end of the lesson we skied back to the meeting point where I was met by Adrian from the ski school who told me that Daniel was going to be moved up a group and hit the slopes for his 3rd day. Great news.

We met Denise, Paul and Chris at the Ski Piou Piou where the kids had their lessons and hit the slope-side bar to spend a small fortune on beer and consume our lunch.

Denise had done a couple of slopes with Chris and Paul and regained her confidence but was still struggling with her boots and had decided to hire some boots for the rest of the holiday.

We picked up the boys and then Tiff and Steve joined us from their boarding lesson where they’d had an instructor give them a private lesson.

Having eaten my baguette, I took Daniel on a couple of slopes so he could practice snowplough. He was quite keen to avoid the button lift where he’d struggled on day 1 but was happy on the chairlift.

Once we got back, Steve and Paul were waiting for me so we could head up in the Gondola to ski a couple of slopes. Visibility had got worse and the snow was getting churned up from the morning’s skiers so it was definitely more challenging.

I’d started the great iPhone app, Ski Tracks, to record my skiing in the afternoon and burned down a few sections of the blue slopes we were skiing reaching about 28 miles per hour. Certainly not my quickest but fast enough given the lack of visibility.

Once we got back, Steve and I looked after the boys whilst Denise, Chris, Tiff and Paul did a few slopes.

Once they got back, it was getting close to 3pm and Steve, Paul, Denise and the boys went back on the resort bus while Tiff, Chris and I did a blue slope (or two) before taking the red back down to ‘1800’. Both Tiff and Chris were boarding and skiing respectively with great technique. 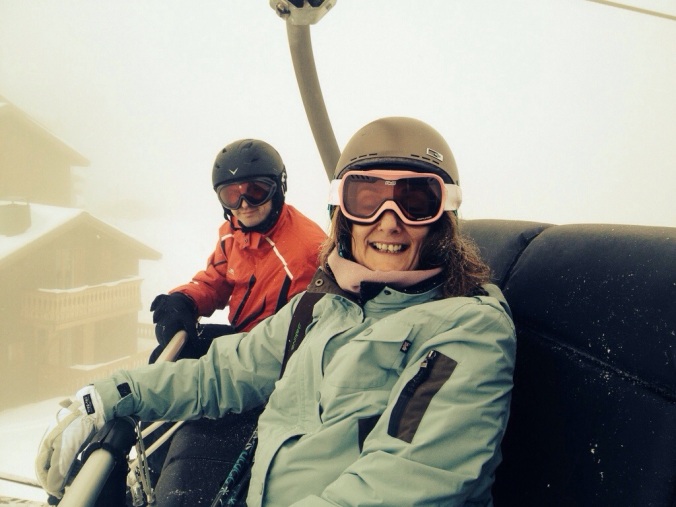 We got back to the bottom of the 4-man lift where we’d started the day and then walked back to the chalet block.

Having settled back in, Denise headed off to the ski hire shop to hire a larger pair of ski boots while the boys did their homework.

We eat at 7 (baked Camembert, Moroccan Chicken with Cous Cous and chocolate mouse) and then sent the boys off to bed.

Day 2 over. 4 more days on the slopes. Really glad that it doesn’t feel like the week is flying by. Yet!