Having completed 2 triathlons so far this year, I decided about 3 months ago that I wanted to do another one before the year was out and fortunately, the team at Try Tri had one left in the calendar for 2013; the HOWSC 100 Triathlon.

The event was held at the Hampshire Open Water Sports Centre (HOWSC) near Fordingbridge which is about 25 miles from home and consisted of 3 different distance events; a novice, sprint and Olympic. Although I toyed briefly with the idea of the Olympic, I settled on the sprint distance instead. This consisted of:

As with most Try Tri events, the distances are a little open to negotiation! The swim might have been a little longer and the bike was definitely nearer 25km. But, it doesn’t matter! It’s all part of the relaxed atmosphere that Try Tri are renowned for.

I did that recce before registration and was pleased that the course was fairly flat (or at least, so it felt in the car!) I took a time-lapse video of the course and later shared it on Facebook for anyone that wasn’t aware of the course.

Having checked out the bike route, I returned to HOWSC and on arrival, I saw Charli who was the Race Director for the event and had a chat. I then went to look at the swim entry and exit. On my way there, Try Tri’s MD Chris and Ben drove up and Ben offered to give me a guided tour. How’s that for service?

We walked up to transition and Ben explained T1 entry/exit and T2 entry/exit. Everything seemed quite straightforward.

Shortly afterwards, fellow LRR and parkrunners Stuart and Tamsyn turned up and we all chatted for a while before heading for home.

The evening was then spent preparing for the event. Running is a very simple sport. T-shirt, shorts and running shoes are all that’s needed. For triathlon, it’s a whole different story. The bike needed checking, tyres checking, all the equipment collected and packed and then loaded into the car with the bike. I have a checklist to make sure I don’t forget anything.

At shortly after 9pm, I went to bed. I’d set my alarm for 5am with the intention of arriving at HOWSC for about 6:30am. My body clock woke me up hourly from 2am and I eventually decided to get out of bed at 4:45am, showered and got ready. I was in the car by 5:25am and arrived back at HOWSC at 6am just after the car park opened.

There were a few others there but it was pitch black. A few wise people had head torches. Wish I’d thought of that. Setting up for transition in the dark was a little challenging. Fortunately, I was the first to rack up for the sprint distance which meant I had a prime spot at the T1 exit of the rack. Although it didn’t really give much of an advantage, it did mean that I had a little extra space at the end of the rack and also could find my bike quite easily.

Having got everything set out by 6:20am, I was then twiddling my fingers for a while. Having said that, I’d much rather do that than be rushed to get to the venue and set up with the hussle of lots of others doing the same.

Having taken a comfort break, it was time to think about getting my wetsuit on. This is always a little difficult to time as once it’s on, getting it off again is a pain particularly for any toilet breaks before the start. It was quite chilly and I was glad that I’d taken my arm warmers.

Teri and her family arrived and she started setting up her bike. I spotted a few other familiar, and mostly friendly, faces including some that I’d seen at other recent triathlons.

Before long, it was time to head to the race briefing which was delivered by Charli. Everything seemed pretty straightforward still although I was a little confused about the run route and how many laps but hoped that this would become clear once we were doing it.

We walked back to the swim start area to collect our timing chips before getting into the water. Everyone shared ‘good luck’ messages and we waded in. The slope down to the water was a little sleep and slippy. Once in, the bottom of the lake was an interesting combination of pebbles, mud and weed. At one point, I waded through a ‘bush’ of weed and wasn’t sure I’d make it out of the other side. Fortunately I did just in time for the rather unexpected 3, 2, 1, go which caught some unawares.

As a single lap 750m swim course, the good news was that I wasn’t going to be lapped (unless I was really slow and the novices caught me up!) I managed to do a half-decent swim for me and wasn’t left dragging behind. Well, to be honest, I’m not sure how many were behind me. I was definitely in the last 3/4 of the swimmers but did manage to pass a few people on the final straight.

Getting out of the lake might have been more of a challenge had Chris not offered a helping hand (and some words of encouragement). The route to T1 was a little challenging with a mini-hill to negotiate which was covered in (quite slippy) matting. Once down the other side, it was time to run, barefoot into transition to get on the bike for the cycle leg.

I found my bike easily due to its obvious position and removed my wetsuit (quite quickly for me), put my helmet on, gloves, race number (on belt) and cycling shoes. Transition wasn’t particularly quick and took me about 1 minute 50 seconds.

I ran to the mount line with my cycle shoes on, never easy and prepared to get on. I struggled to clip in and had to try again. Fortunately, the 2nd time, I was good to go and started peddling.

My cycle leg went really well for almost all of the first lap. I was really pleased that I’d familiarised myself with the course before hand and knew what to expect. Fortunately, the roads were relatively quiet and I made good progress overtaking a handful of competitors on the first lap. After about 6 miles, my bike started to get sluggish and I couldn’t work out why. I carried on regardless.

I keep looking at the rear tyre and things didn’t look right. I had a puncture. For a short while, I hoped that I could carry on without stopping but the tyre was completely flat. I had to stop. Fortunately. the verge was quite wide and it gave me plenty of space to stop and contemplate what to do next. For a moment, I considered stopping and walking back to transition. However, I wanted to earn myself a medal for completing the triathlon so set to work to replace the inner tube. I was really glad that I’d done the RideRide Cycle Maintenance course. However, it still look me severa minutes to remove the wheel, remove the inner tube, replace it and then put the wheel back on. It was then time to pump the tyre up which with a small pump was impossible. I managed to inflate it to about 60psi (of the recommended 145psi!) and then set off. Within seconds, it was clear that something was wrong with the mech so I stopped, sorted that out, and then set off again. In total it took me 9 minutes and 45 seconds to sort out the puncture. Any chance of a performance I’d be proud of had slipped away.

A very clear indication of a break for 9:45!

I set off to complete the next lap, a little worried that I’d get another puncture. I didn’t have a spare inner tube. The 2nd lap was uneventful and I managed to pass several of the novice competitors who were already out on the bike course for their 1 lap. As I turned back onto the A338, I saw Teri ahead in her distinctive GE triathlon suit. As I passed, I wished her well and headed for T2. This went fairly smoothly. I was really wary of getting cramp as I had done in both previous triathlons. Fortunately, I’d been hydrating regularly during the cycle with High 5 Zero electrolyte tablets in water. These must have done the trick as there wasn’t even the slightest hint of a cramp at any stage of the triathlon. 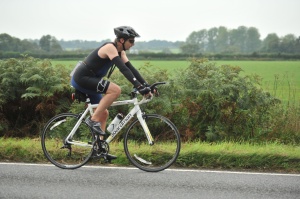 Teri’s T2 was much quicker. This could have been down to her cycling in her running shoes. She exited transition looking strong. I was plodding if I’m honest and was a little despondent about the puncture and its effect on my performance. However, I carried on and keep a steady, if relatively slow, pace. The run course was mainly on grass and had some very mild undulations. What I mean to say there is that it was flat. The elevation profile wouldn’t have been any worse than Lakeside and its elevation shared some similarities.

I was still a little confused by the number of laps we had to run and was glad that I had my Garmin to tell me the distance I’d run. Had I not had it on, I might have run a shorter course (as others did end up doing). If there’s one thing that needs more clarification for next year’s event, it’s the run course. It has to be really clear what laps need to be done.

After 2 laps, it was time to head for the funnel. It was great to have an entourage of friends giving encouragement as I finished. It was also great to catch up with Steve (from RunCamp) and Nick (ex-work colleague) after the finish. 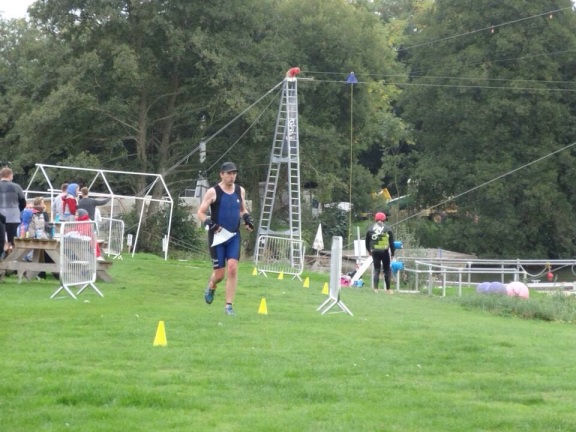 I have to say that the medal that we received was excellent. Possible the best medal I’ve got so far. Combined with the latex swim cap, Try Tri pulled it out of the (goodie bag)! Nice one team!! 🙂

In summary, it was another great Try Tri event. Super-friendly team and marshals. Great course with only a couple of niggles which would be difficult to resolve due to the venue. The only negatives were the lack of warning about the swim start and the ‘confusion’ over the run course.

WIth regards my performance, I was happy with how well I’d done. I was particularly happy with the swim and the cycle (apart from the puncture and its effect on my time). The run was a little poor and I know that I need to work on this as I struggle to reach a decent pace after the other two disciplines.

Great performances from Roelie, James, Teri, Tamsyn, Stuart, Steve, Nick and many others.

I’ll add the official stats and any photos later.

Had I not got a puncture, things would have looked a little different with a 00:54:47 cycle making the time for the whole event 1:47:52 which would have put me in 25th place which would have been very respectable I’d say. Ultimately, the puncture lost me 9 places. However, I’m still happy to complete the event and have a great time doing so. 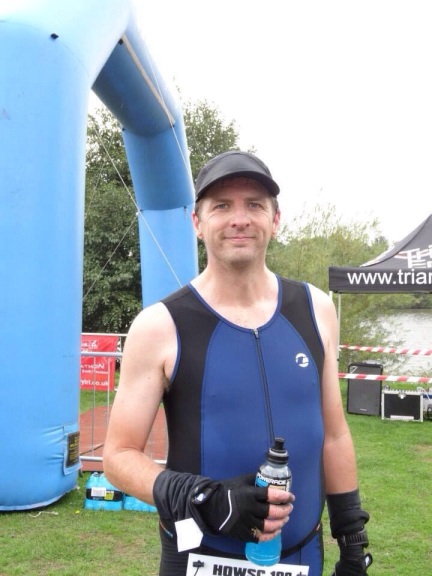