Although I’ve been to many local parkruns (easy as I founded or helped to found most of them), I’ve neglected a few too. These are:

These events are just a little too far away to enable me to get to/from in under 40 minutes and that’s the excuse I’ve given for not visiting before.

However, 2 weeks ago while in conversation with parkrun UK MD, Tom Williams, he mentioned that he’d be visiting Andover parkrun and I checked my diary to see that Daniel had other plans so decided to make amends and tick another event off my list.

Finding the venue was slightly more complicated than I’d hoped as the postcode on the event’s course page didn’t take me quite to the location of the parkrun. Fortunately, once I got there, it was pretty clear so I parked and then headed to the start area.

Although it was 8:25am, other than a couple of dog-walkers, I was the only person there. At first, I wondered whether I was at the right place and then across the field walked a small group of people who then erected a gazebo. Could they be the set up team? None were wearing running gear and there wasn’t a parkrun club T-shirt being worn. I did wonder whether they were a family setting up for a fun day in the sun for a day but I then spotted the white plastic stakes commonly used for the finish funnel. I was in the right place after all.

As I wondered across, I spotted Jon, the Event Director, who’d recently added me as a friend on Facebook. As I approached and said hello, he introduced me to the other Run Directors. A really friendly bunch including a couple of Ironman T-shirt-wearing triathletes.

As they set about setting things up, I spotted the black 100-club T-shirt clad Tom Williams pushing his daughter, Rosie, in a buggy, closely followed by his wife, Helen.

Next up, we started blowing up balloons. The event were celebrating their 2nd anniversary a week early as on their actual anniversary date, the main RD team were not available. After blowing up a few balloons, Tom asked if I wanted to go for a warm up. This was a little scary!! Tom is a very good runner and I was unsure whether he’d want to jog around with me (plus warm ups normally kill me)!!

We set off for one lap of the 2-lap course trying to work out where the course went as we ran. There were no direction arrow on the course but there were some parkrun wooden posts and blue slabs set into the ground. We (kind of) managed to work out most of the way but, as it turned out, made a couple of mistakes. 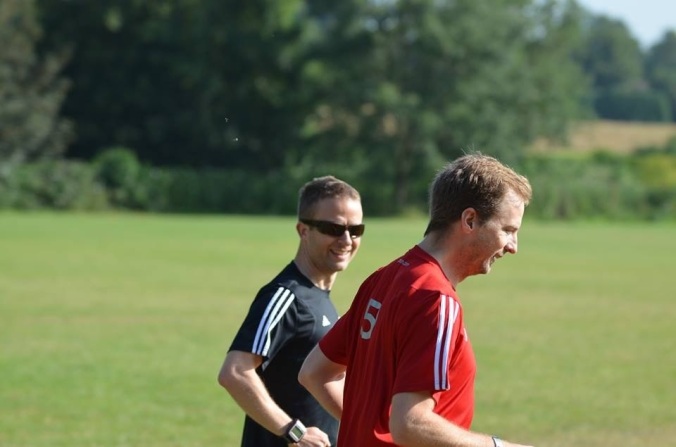 The 2-lap course is a mix of mostly grass around the playing fields, some tarmac paths and some loose gravel. Part of the course takes you around the perimeter of a lake which looked very pretty but wasn’t inviting for open-water swimming.

As we jogged around, Tom and I caught up on a few parkrun topics. It was a great opportunity to have a chat. It was really nice to hear that he’d enjoyed my ‘parkrun Corner’ about running with Daniel. I do wonder whether they’re read at all!!

After 1.5 miles, we got back to the start area at about 8:55am and the field was much busier with parkrunners. I spotted Paul Hammond with his camera and also fellow-LRR members, Kev and Alice Yates so wandered over for a chat.

Before long several other friendly faces emerged onto the field including Elaine and Colin Brassington and Matt Lane.

To be honest, other than the occasional ‘hello’, I’ve never really spoken with Alice although we’re Facebook friends. Being FB friends meant that we knew of each other and resent antics and that broke the ice quite well and we decided to run together.

Before the start, the pre-run brief was really good and Tom said a few words too.

Once we started, it was getting really warm. I was already sweaty from my warm up and was dripping by the time we set off.

As we ran, Alice and I chatted. It was really nice to have some company. I love running with Daniel and do miss him when he’s doing other things on a Saturday morning but tend to find that when he’s not there that I run solo and even in a pack of 100, 200 or 500 runners and knowing lots of people, it can be a little lonely running by yourself. 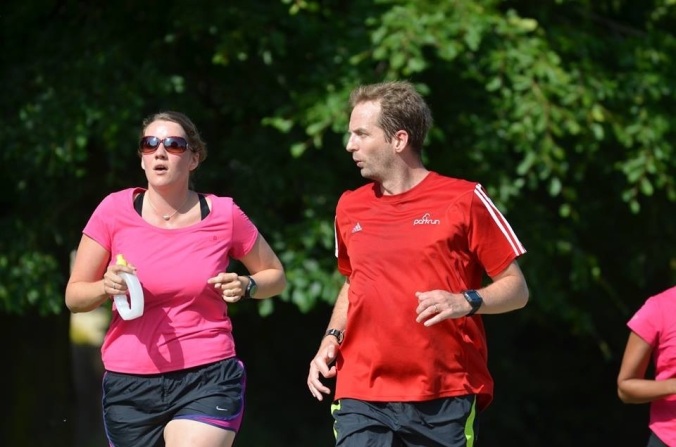 We didn’t overdo things and kept our pace steady with 9:05ish minute miling. This meant that we could chat – although by the 2nd lap, this had almost stopped due to the soaring temperature.

Alice insisted that I run at my pace if I wanted to but I was enjoying the company and knew that running any faster in the heat was likely to lead to me blowing up or bailing out. In honesty, having Alice running with me kept me going when I may have been tempted to ease back into a walk.

As we headed for the finish funnel, there was just time to re-adjust shorts for a finish sprint photo and then we crossed the line.

By that time Kev had sampled every celebratory cake in existence and appeared to have received a medal for his efforts!! In reality, he deserved several medals the way he was tucking in to them!! (It turned out that all finishers received a medal (a nice thought) for taking part in the ‘anniversary’ event).

Another great idea was that all finisher’s position barcodes were used in a draw to choose the Sweatshop prize winner of the month. That was a great way of keeping runners at the event.

After cooling down in the shade, we headed down to a local pub for the post event food and beverages. 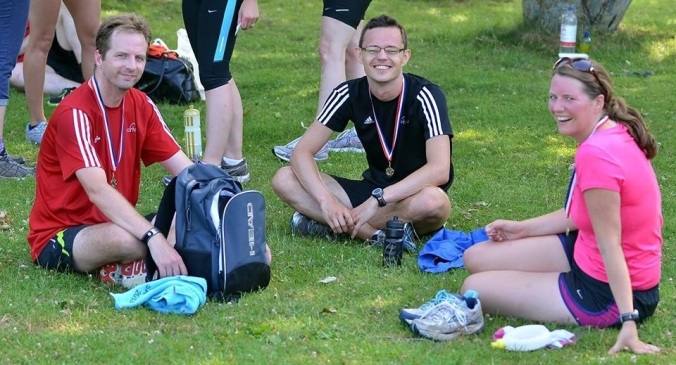 Overall, a lovely course, a great parkrun, some great company. All on a very hot day.