The forecast during the week looked awful for Saturday and I was quite doubtful whether Daniel and I would be parkrunning at all. With over 10mm of rain forecast for before 9am, I knew that the conditions at Fleming Park would be poor but the reality was actually worse than I expected!

Daniel and I got up early and were out of the door at 8:15am. We wanted to leave early before Denise looked out of the window and put a stop to the morning’s adventure!!

When we got to Fleming Park, the condition of the field was bad enough. Very damp underfoot with puddles to avoid. Daniel, of course, made a bee-line for them! Once we’d crossed the field, negociating a path to the start area of the parkrun was tough enough. It really was bad. I didn’t Daniel to get too cold and wet before the start but, unfortunately, that wasn’t really going to be possible given the number of puddles crossing every path.

It was great to see lots of friendly faces as always. Lots of banter and lots of festive costumes some of which crossed the line of public acceptability (Mr Stocks, I’m talking about you!)

Before the start, Deb awarded the prize for the best dressed male and female junior. To our surprise Daniel won! This was mainly due to the fact that all the boys had a festive piece of headwear but Daniel also had a face-painted beard and red nose. Daddy’s handywork!

We were soon off running. There was a lake to negiociate within a few hundred metres. It was deep, cold and not very pleasant. The rest of the course was a mix of very damp, puddles or mud. Daniel kept hold of my hand which was lucky given the number of times he slipped! He was saved from falling over in the mud several times. 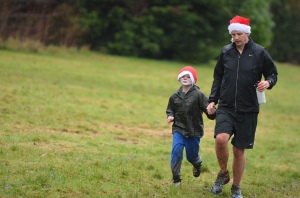 It was soon clear that there was no way we were going to get Daniel a PB. Running wasn’t very easy and Daniel’s legs soon became tired. We probably walked and ran in equal measure and crossed the line in just over 43 minutes. It wasn’t a great run but we did it and Daniel completed his 2nd parkrun.

Daniel got lots of encouragement from the marshals and other volunteers and even had a battle to the finish line with myself and Dave Clothier. Daniel beat us both!!

Only 8 more parkruns to go until he reaches 10 parkruns and he’ll receive his coverted white T-shirt.

I was asked at the end in the cafe whether I thought I should be allowing Daniel to run 5km to which I replied that he wasn’t running the full distance and was run/walking with the run being a maximum of about 3km of the 5km. Daniel has been used to long walks with the dog so it’s not completely new to him and he’s enjoying parkrun. Things might be different if I were dragging him around under protest but that’s not happening at all.

I’m hoping that although I’m due to be RDing next Saturday that someone will hold the reins to allow Daniel and I to run again. If not, we’ll most likely have to wait until the 5th January before our 3rd parkrun together.

Many thanks to Paul Hammond for the great photos.