Have had a few good runs this week. The first on Monday was a long slow run; 8.75 miles. Followed that with 6 miles on Wednesday and then a short run (2 miles) on Friday in preparation for today’s Eastleigh parkrun.

Have worn my Vibram FiveFingers all week during my runs. Absolutely no side effects at all (e.g. no blisters, calf ache etc).

For the Friday and today’s run, I was using the latest Runkeeper Pro beta. A few new features although no necessarily the ones I’d been hoping for. Maybe next time. It’s clear that the main focus in this release has been ensuring compatibility with iOS4 which is due to be available on Monday (21st June). The other features are certainly addressing some of the user’s wanted features but they aren’t killer features.

I’d set myself the target of completing the 5K in 26 minutes (target pace 08:22 mins/mile) and with the help of Runkeeper, managed to keep to this target for the whole race. I did have some slow sections during the latter 2.5K but managed to accelerate towards the end to finish in 25:57. 3 seconds ahead of target. A new PB. That means an improvement of WAVA age grading performance of almost 2%. Very pleased with that. I do think that I can shave 30-40 seconds more off which would be great.

If I were able to get to 25:00, that’d mean a 4h marathon time estimate. That would be amaizng!

In terms of my ‘minimalist’ running, I feel as if my form is getting better and better.

Am almost finishing reading Chris McDougall’s ‘Born To Run’ which makes a strong argument for ‘barefoot’ running. I personally don’t think things are quite so black and white in the ongoing debate between shod or unshod running. 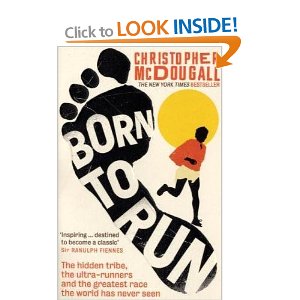 In my view, heel striking is not good as I believe that it can lead to injury (e.g. ankle, knee, shin injuries). Normal running shoes encourage heel striking due to their thick, padded heel as landing on the heel with this ‘protection’ makes the landing feel more comfortable. However, that ‘protection’ simply isn’t protection enough.

Running barefoot or wearing minimalist shoes such as Vibram FiveFingers isn’t necessarily the answer to injury-free running. It/they simply act as a ‘tool’ to encourage running with a better form. Running in ‘normal’ running shoes doesn’t prevent you running with a good form, it just makes running with a bad form feel better than it would without all the padding and support the shoes provides.

Barefoot or minimalist shoes make you run better almost organically. You can’t (or wouldn’t want to!) heel strike simply due to the fact that it hurts. You have to land on midfoot (or forefoot) instead. Your cadence naturally increases and your steps are lighter. Anything else hurts.

Prior to changing my running form (with the help of Vibram FiveFingers), when running in normal running shoes, I could feel every thud of the heel as it hit the floor reverberate through my body. On some days, especially when tired, the ‘thud’ gave me a headache and knee pain was an inevitable consequence. By changing form, none of these issues occur.

Could I have changed my form without Vibram FiveFingers? Most defintely. In fact, having read about Chi Running I thought I was improving my form. However, I realised I was fooling myself when I wore the VFFs and realised I’d still been heel striking.

Interestingly, in the last couple of runs I’ve been using a metronome track with Runkeeper whilst running. The track plays a tick sound at 180bpm and without really releasing it, I was already running at that cadence.

In summary, I’d say that many recreational runners can improve their running and reduce the chance of injury by focusing on improving their form. It’s not necessary to ditch your normal running shoes to do this but minimalist shoes act as a great tool to naturally adopt the right form.